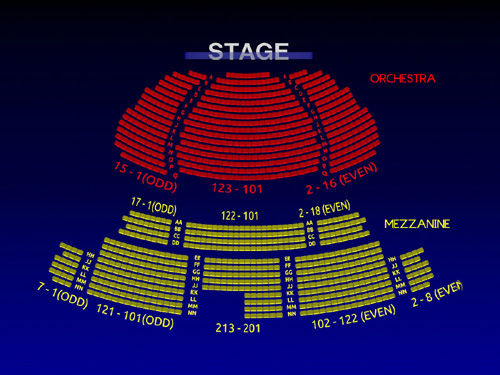 Originally named the Gallo Opera House, Studio 54 was constructed in 1927 before it was converted into the New Yorker Theatre in 1930. The venue was leased to CBS studios from 1942 until 1976 when CBS sold the it and the space was renovated into the most renowned disco club of its time, Studio 54. Disco fanatics danced the night away until 1980 when the club closed. Since then, the venue has been used as a space for even more nightclubs and rock concerts. The Roundabout Theatre Company transferred its production of Cabaret to the former nightclub in 1998, and since that time the space has been home to the company.

From Operas to Nightclubs

In 1943, CBS purchased the theatre and renamed it Studio 52. Until the 1970s, the studio broadcasted several shows including What’s My Line? and Captain Kangaroo. CBS sold the studio in 1976.

Two American entrepreneurs, Steve Rubell and Ian Schrager, purchased the studio and converted it into a nightclub. They desired a frequently changing atmosphere, so they took advantage of the original fly rails used to move theatrical sets and lights. During the club’s first year, it made seven million dollars. In December 1978, Rubell instigated a probe of the club when he boasted that only the Mafia made more money than Studio 54. This led to Rubell and Schrager being charged with tax evasion and conspiracy in June 1979. A second investigation occurred in December of that year, and Rubell and Schrager faced prison charges and were forced to sell the club.

Allied Partners purchased the building and renovated it before it reopened once again as a nightclub with a concert by disco celebrities Gloria Gaynor, Sister Sledge, and Vicki Sue Robinson. The club went bankrupt in 1996 and Allied Partners planned on destroying the building and replacing it with Cyberdrome, a virtual reality gaming site. Roundabout Theatre Company came to the rescue when access to Henry Miller’s Theatre was blocked by a construction accident. The revival of Cabaret was in the middle of its run at the Henry Miller, and to keep the musical open, the Roundabout Theatre Company transferred the show to Studio 54, and eventually purchased the venue.

Notable productions at Studio 54 include Stephen Sondheim and John Weidman’s Tony Award-winning Assassins (2004) starring Michael Cerveris and Neil Patrick Harris, Sondheim and Weidman’s Pacific Overtures (2004), Tennessee William’s A Streetcar Named Desire (2005) featuring Natasha Richardson and John C. Reilly, 110 in the Shade (2007) with Audra McDonald and John Cullum, and Bill Irwin and Nathan Lane in Samuel Beckett’s Waiting for Godot (2009). The main event of 2010 was the production of Sondheim on Sondheim, James Lapine’s tribute to his collaborator. The tribute included performances from luminaries including Barbara Cook, Vanessa Williams, and Norm Lewis.

Studio 54 was constructed by Fortune Gallo, an Italian opera impresario, and designed by architect Eugene DeRosa. Patrons entered through an entrance on 54th Street that led down a hundred-foot mirror and marble walkway, taking them to their seats. There was only one balcony, but it was divided into two sections.

In 2005, Roundabout Theatre Company finally cleared out the nightclub tables that it had been utilizing since Cabaret, and put in rows of seats on risers to create the inclined seating that today’s Broadway audiences desire. The marble/mirror walkway has been converted into a mini museum.

Welcome Back to Broadway

Studio 54 is one of the most famous theatres on Broadway to be returned to theatrical use in the late twentieth and early twenty-first centuries. It was such a renowned club that people had a difficult time believing it could run as a legitimate theatre ever again. Despite everyone’s doubts, Studio 54 was protected and reconstructed. Today, patrons watching a production at the venue are sitting in the original auditorium space that can now accommodate up to 944 patrons.