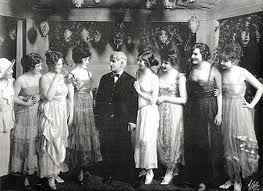 Belasco was a well-known admirer of women

In the late 19th and early 20th centuries, impresario David Belasco was a major figure in the American theatre. He started out working in the theatre when he was a young man in San Francisco. Belasco was a disciplined stage manager, a gifted playwright and a solid businessman. By the end of his career, which ran from 1884- 1930, he was involved in about 100 productions in one way or another. Belasco had a lot of energy in those years and apparently, long after his death in 1931, that energy has not entirely dissipated.

The theatre was designed for Belasco by architect George Keister. It opened its doors as the Stuyvesant Theatre on October 16, 1907. In 1910, Belasco put his own name on the theatre. The design included Tiffany lighting and ceiling panels, large murals that were created by Everett Shinn and beautiful woodwork. The showplace included a ten-room duplex penthouse. Belasco lived in the apartment and also used part of it as his office. He could see the stage from a window in his office and was known to keep a watchful eye on it. Belasco spent just about all of his time at his theatre and it certainly makes sense that his spirit would want to stay around. 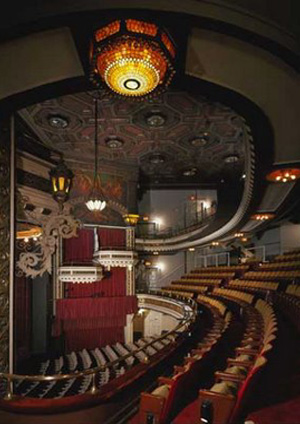 Belasco is said to watch plays and rehearsals from the balcony.

Belasco has been seen dressed in the same type of clothes he wore in life- a cassock and a clerical collar. This costume earned him the nickname “The Monk” and the “Bishop of Broadway.” Belasco’s ghost started to appear at the theatre immediately after his death. Sightings have been numerous and consistent in terms of what people describe. He’s said to watch plays and rehearsals from the balcony and at times it’s been reported that he has spoken to actors after a performance. Doors open and close on their own, an incapacitated elevator is said to have once moved and it was reported in the New York Times that at 4 pm a dog was known to growl at “someone” unseen. In 1995 during a production of Hamlet odd sounds were reported in the theatre, curtains moved and there were various sighting of Belasco.

Belasco, who was a well-known admirer of women, seems to have attracted another ghost- that of a woman in blue. The ghost has also been known to approach actresses. Also, an investigation by Paranormal NYC that was conducted on September 10, 2006 and which aired on the Sci-Fi Channel reported an “unusual moment.” What occurred was one of the investigators observed a white soccer-sized ball moving “erratically” in a dark room. By the way during the long run of Oh! Calcutta!, a sexual musical revue that included frontal nudity, it was reported that the ghost seemed to have disappeared. 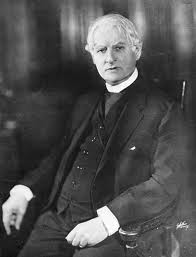 “The Monk” and the “Bishop of Broadway.”

Those working at the theatre have a better chance of seeing the impresario just due to the fact that they have a lot more opportunity. But there is a chance that you may see the dark man who stands in the balcony or lurks backstage. David Belasco seems to be one with his theatre.