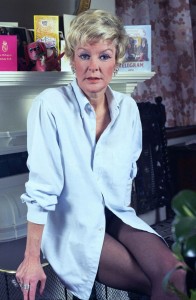 Elaine Stritch has been acting on Broadway for more than 65 years.

Elaine Stritch, who created the role of Joanne in Company (1970) has been performing on Broadway since 1946 when she appeared in Loco. Her career includes over 20 Broadway shows, numerous West End productions and various national tours. Although she prefers the stage, she has also appeared on various television shows and in movies. Stritch has had an amazing career and continues to be a force on the stage and in other venues.

Stritch already had a rich and full Broadway resume by the time she was cast as the hard-drinking, honest and painfully insightful Joanne in Company. She had starred in the 1952 revival of Pal Joey, the 1955 premiere of Bus Stop, for which she received her first Tony nomination, and the 1962 production of Noel Coward’s final musical Sail Away, for which she earned her second Tony nod. She had completed numerous national tours and had replaced Uta Hagen on Broadway in Who’s Afraid of Virginia Woolf? 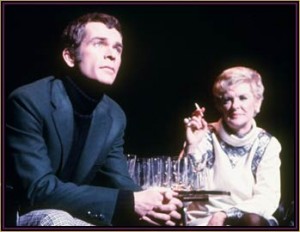 Stritch as Joanne and Dean Jones as Bobbie in Company.

Caustic, cynical and mocking, Joanne, who is married to Larry, is one of Robert’s , the lead character, best friends. She drinks, smokes and criticizes to excess. She also sings two of the most poignant and honest songs in Company, “The Little Things” and “The Ladies Who Lunch.”

“The Little Things” takes a harsh but humorous view of marriage and “The Ladies Who Lunch,” which Joanne sings when she is thoroughly drunk, offers a biting and brutally honest view of middle aged women who politely drink away the afternoon and spend their lives doing meaningless things.

Stritch as Joanne was tough, honest, and comical. She utilized her powerful presence in the role and, at the same time, was able to give the character a tender quality. In playing the brutally honest Joanne, she captured an essence that made her likeable, pathetic and exasperating.

“The Ladies Who Lunch,” the recording of the original cast album with commentary.

She made Joanne her own, playing the role on Broadway, in the national tour and in London. But Elaine Stritch had a dark side that was slowly affecting her.

Stritch had her first drink when she was 13 years old. She drank before every performance to combat stage fright and was a noted partier after the final curtain. Sometimes she would go right from a party to a matinee performance.

Stritch on Ellen talking about her drinking days.

After 52 years of drinking, with diabetes setting in and other health issues coming to the forefront, the Broadway star got sober. In her one-woman show, which focuses on her career and personal life, she offers numerous insights into her drinking problem. If you compare the Elaine Stritch from the years during which she was drinking to her time enjoying sobriety, you’ll see a very different person. She’s still funny, honest and tough, but she’s also more thoughtful, focused and calm.

She is Still Here 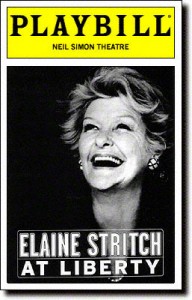 Elaine Stritch has been nominated for four Tonys and seven Emmys. She has won Three Emmys. In 2002, she won a Tony Award for Best Special Theatrical Event and a Drama Desk Award for Outstanding One-Person Show for her show entitled Elaine Stritch at Liberty.

Stritch has had a rich career and has managed to conquer what was a major alcohol problem. It has been 23 years since she had a drink. At the age of 88, she is still passionate about performing. She can be edgy and brassy one moment vulnerable and light the next. Of course, she will always be known for the role that she defined and that defined her a Broadway, Joanne in Stephen Sondheim and George Furth’s Company.