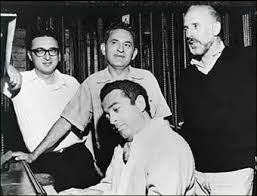 Harnick, Stein, Bock and Robbins created Fiddler on the Roof.

With Fiddler on the Roof the golden age of the American book musical came to an end. It wasn’t that book musicals were no longer written. There were still plenty to come. But the great ones, those that had solid, literate books with deeply motivated characters and in which everything flowed from the story and the characters, would no longer be written. What happened to the book musical and why it changed will be discussed in the final two parts of this series. In this section we consider Fiddler on the Roof and what made it such a stellar and important show. 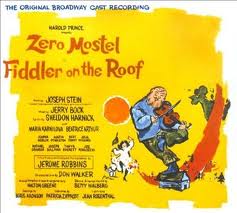 Jerry Bock (music), Sheldon Harnick (lyrics) and Joseph Stein (book) created Fiddler on the Roof. The musical is based on decided Sholom Aleichem’s Tevye the Dairyman. The title was inspired by Marc Chagall’s painting, which is entitled “The Fiddler.” The fiddler becomes the central metaphor for the show. He represents the ability to keep one’s balance and survive when put in precarious positions. Because he’s a symbol traditional tied to tradition, he reinforces the power of tradition and how it can give a culture that is dealing with uncertainty a solid foundation on which they can stand. 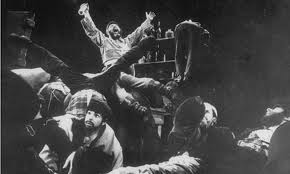 Tevye must deal with a changing world.

Bock, Harnick and Stein utilized this central metaphor throughout the musical as the Jews in the tiny Russian village of Anatevka face various challenges and threats to their traditions, religion and way of life. At the end of the musical this includes the expelling of Jews from Russia by the Tsar. Although the play very much offers a picture of village life, its true power comes from its focus on the milkman Tevye, the central character in the play, and his family which includes his wife Golde and their five daughters.

Throughout the musical we see Tevye struggle with a changing world that constantly challenges his traditions. He must balance old ways and new ways to forge a future for his family. 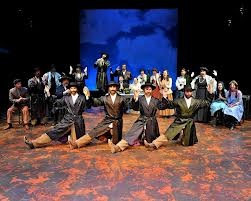 It was director/choreographer Jerome Robbins who would take this musical and through his masterful work give the show universal appeal. Through his direction Tevye (Zero Mostel) and Golde (Maria Karnilova) became a husband and wife and parents with whom just about anyone could identify. And although the play was deeply connected to Jewish religion and culture the focus on a family dealing with real-life issues in a changing world gave it a universal appeal.

Like other great book musicals, the three major elements in Fiddler on the Roof work in a seamless manner. Bock used culturally traditional styles and rhythms in some numbers (“Tradition,” “To Life,” “The Bottle Dance,” “Sabbath Prayer” and “If I Were a Rich Man”) and Broadway style music in others (“Matchmaker, Matchmaker,” “Far From the Home I Love” and “Do You Love Me?”).

Harnick’s lyrics flow and weave throughout the music, at times utilizing both traditional and cultural references as in “Miracle of Miracles,” “Anatevka” and “Tradition” and other times more universal poetic conventions such as in “Far From the Home I Love” and “Sunrise, Sunset.” And as it is with all great book musicals, everything, the dialogue, lyrics, music and dance, are all a result of the situations and what the characters want.

Mostel and Karnilova both won Tonys.

Fiddler on the Roof received 10 Tony nominations and it won nine awards, including Best Musical, score, and book. Robbins won for best direction and choreography and Mostel and Karnilova won as best leading actor and actress. It embraced a standard of excellence on every level.

Fiddler on the Roof is a masterful musical. It was also a show in the right place at the right time as it offered the right theme for the era. The show premiered on Broadway in 1964 just as traditional American values were about to be questioned. The second half of the decade of the ‘60s would be turbulent and Fiddler on the Roof became a metaphor for simpler times, the need for tradition and the challenges that the coming era would bring. It was also, in its time, place and form, the ultimate traditional book musical. 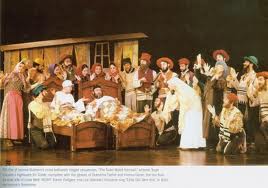 That’s to say that the book musical was no longer new, groundbreaking or unique; it had become a monolith. Fiddler on the Roof opened September 22, 1964 and it closed July 2, 1972 after 3,242 performances. At that point, it was the longest running show in Broadway history beating out Life with Father, which has held the long run record of 3,224 performances when it closed in 1947.

Two other points of reference- The Beatles arrived in the U.S. for the first time in February 1964 and Woodstock would occur in 1969. Assassinations, civil unrest and Vietnam would define the decade and still Fiddler and its focus on tradition played through it all.