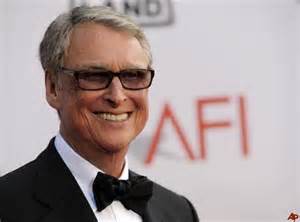 Mike Nicholas at AFI ceremony where he was honored.

The passing of Mike Nichols last week at the age of 83 was significant in many ways. Nichols, who at first carved a career as a comedian with Elaine May, became one of Hollywood’s and Broadway’s most respected directors and producers. He is one of the few to have won a Grammy, Emmy, Oscar, and Tony. His totals include one Grammy, one Oscar, four Emmys, and nine Tonys. He also received numerous Drama Desk Awards, a Golden Globe, the American Film Institute Lifetime Achievement Award (2010), and in 2003 was one of those who received one of the prestigious Kennedy Centers Honors.

Born Mikhail Igor Peschkowsky in Berlin, Germany, on November 6, 1931, he was a child when Hitler came to power. His father, a Jew, fled Germany first and in April 1939, when it became extremely dangerous to be a Jew in Berlin, Mikhail, who was seven, and his three-year-old brother Robert, were sent to the United States to be with their father. In 1940, their mother, who was also Jewish, escaped to the U.S. through Italy.

When in the U.S., it was Mike Nichols’ father who changed the family name. His dad was born Pavel Nikolaevich Peschkowsky. He changed his name to Paul Nichols, adapting Nikolaevich. Mike Nichols became a naturalized U.S. citizen in 1944. 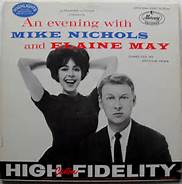 Nicholas and May won a Grammy for this LP.

Nichols joined with Elaine May, creating the highly successful comedy due of Nichols and May. Many years before creating the act, they had a brief college romance while both were in Chicago. Sometime after, Nicholas, who wanted to be an actor, traveled to New York for training under Lee Strasberg, but he could not find work on the stage.

He went back to Chicago and became a part of the pre-Second City improvisation group, the Compass Players. Paul Sills was their director, and the company included Shelly Berman, Del Close, and Nichols’ friend, Elaine May. It was at that time that the two created the foundation for Nichols and May.

In 1960, they played on Broadway in a show entitled An Evening With Mike Nichols and Elaine May. The audio recording of the show received the 1962 Grammy Award for Best Comedy Album. Despite the fact that the two set high standards for satiric comedy and were a major hit, they broke up in 1961 due to tensions and various idiosyncratic challenges that they experienced. However, after many year, they would reconcile and work together on numerous projects. 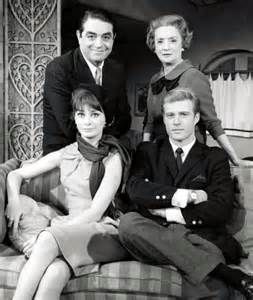 Barefoot in the Park.

In 1963, Mike Nichols landed the job that would change his life forever. He was chosen to direct Neil Simon’s play Barefoot in the Park. It was then that he discovered that directing was a perfect fit for him. The show ran for 1,530 performances and for his initial Broadway directing stint, Nichols won his first of what would be nine Tonys.

In 1966 and 1967, after numerous stage hits, he would also become a premiere film director. His first directing project was the screen adaptation of Edward Albee’s Who’s Afraid of Virginia Woolf? The film was the number one hit of the year and won Nichols critical acclaim and the four leads Oscar nominations.

The following year Nichols directed The Graduate, which brought Dustin Hoffman to prominence as a leading man. Hoffman was not your prototypical Hollywood lead, as he was short, had a fairly large nose, and a general plain quality. The choice of Hoffman would be brilliant for many reasons. His genuine and real acting style made the film click and connected with audiences, and, to a degree, Hoffman changed how Hollywood defined leading men. For The Graduate, Nichols won an Oscar as Best Director.

Nicholas directed and produced a string of hits on Broadway and numerous big films. His Broadway credits included numerous Neil Simon plays, musicals, and hard-hitting dramas. His string of Tonys in the 1960s and 1970s is phenomenal.

It was in 1984 that he would reach a new high with Tom Stoppard’s The Real Thing. The Real Thing starred Jeremy Irons as Henry, a disillusioned playwright, and Glenn Close as Annie, an activist who is married to Max, an actor, but who is having an affair with Henry. Christine Baranski played Charlotte, an actress who is married to Henry and starring in his latest play. 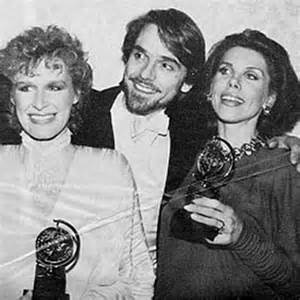 Tonys for Close, Irons, and Barnaski.

The Real Thing is an investigation of love, a questioning of commitment, and a bundle of energy devoted to attempting to define what is “the real thing” when it comes to male/female relationships. The nuance, the movement, energy, and progression, and the detailed characterization were stunningly orchestrated in Nichols’ production.

The Real Thing opened at the Plymouth Theatre on Broadway on January 5, 1984 and closed on May 12, 1985. Close Irons, and Baranski all won Tonys. For Mike Nichols it was a big night as he won a Tony for his direction and another for Best Play. For The Real Thing, Nichols also received the 1984 Drama Desk Award for Outstanding New Play.

From Spamalot to Death of a Salesman 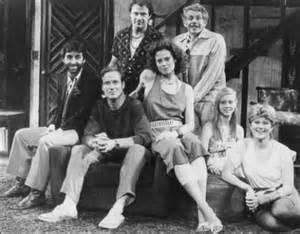 Nicholas showed amazing range as a director. From Spamalot to Death of a Salesman, from Streamers to Comedians, and from My One and Only to Hurlyburly, he ably directed and often produced some of Broadway’s best work. There seemed to be nothing that Nichols could not direct.

He became noted for being able to get stellar performances from the actors with which he worked and for always finding the essence of a show and bringing it to life. He recognized talent in actors, playwrights, and designers, and he managed time and again to bring everyone together to form a singular vision of a play or musical. He was known to be a nurturing director who formed close working relationships with playwrights and actors.

Mike Nichols directed his final Broadway production just about a year ago. It was the Broadway revival of Harold Pinter’s Betrayal, starring Daniel Craig and Rachel Weisz. The show began previews on October 1st and opened at the Ethel Barrymore Theatre on November 3, 2013, where it ran through January 5, 2014. It was Nichols final bow in a long and brilliant career.