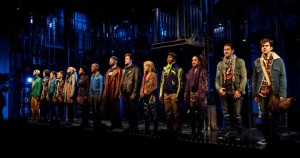 The cast of the recent Off Broadway revival of Rent!

In light of the preparation of BroadwayCon, an event whose proceeds go wholly toward the fight against AIDS with Broadway Cares, co-creator Anthony Rapp is right to believe that the Broadway community is the best to turn to in that fight. Generally, the theatre community is the most accepting of all gender and sexual identities. Shows like La Cage aux Follies, Kinky Boots, Rent, Cabaret and Priscilla Queen of the Desert share the “I am what I am” message to theatre goers around the world. However, tolerance and this message conflict sometimes, especially with older crowds in summer stock theatres. Do these shows change anything about the way audiences think?

To Market, To Market

Marketing departments who reach out to audiences are the top tier of proper language for interviews, event postings, website jargon, and even the way box office ticket agents speak with potential audiences. These theatres don’t want to lose their long-time, faithful subscribers, so they sometimes instruct their employees to use specific wording that doesn’t completely explain the plots of these musicals. Simply using the phrase “in drag” doesn’t always encompass the true message or direction of a show. This leads to angry audience members leaving the theatre before the second act.

When All Else Fails, Take it Away

Back in April, we were first faced with the North Carolina Bathroom Bill. This bill states, of course, that people are required to use bathrooms assigned to their biological gender at birth. Mississippi also mentioned enforcing it at that time and musical theatre writers were ready to act by withholding rights to their shows within those states. The writers of West Side Story asked MTI to act: “MTI serves as an agent for the rightsholders whose shows we represent. The rightsholders of this show have made their intentions clear and MTI will not issue new licenses for this show within North Carolina or Mississippi until we receive new instructions.”

This withholding took place by the power of multiple voices from the theatre community. We are still talking about the bill in North Carolina, but the community doesn’t want to stand for the discrimination. Other events like the cancelling of the reading of the new Prince of Egypt musical due to wrongful casting, are helping us realize flaws within the theatre system. The Bay Street Theatre was the site for the staging of this concert and they approached the situation by thanking the public for sharing their feelings, apologizing for disappointments, and stating that this would help them “continue the conversation.”

The reaction of the theatre community to discrimination in the government and its own community is strong. Our efforts for political correction and inclusion do work. We can hope that “I am what I am” shows continue to pose the questions of inclusion in our society to many different audiences.

« Transmedia Storytelling with Waitress the Musical
Broadway On This Day: January 19th »