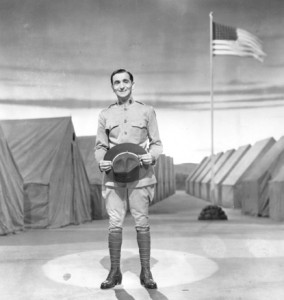 Berlin was patriotic and loved America.

He was born Israel Isidore Beilin but became known as Irving Berlin due to a printer’s error. When Israel Isidore Beilin first song was published (“Marie from Sunny Italy”), the sheet music gave credit to “I. Berlin” and Beilin, who was born in Russia and emigrated to the U.S. as a child with his family, liked and adopted the new identity. Soon all of America would know the amazing talent of Irving Berlin.

First of Many Hits

“Marie from Sunny Italy” was published in 1907 when Berlin was 19 years old. In 1911, the composer/lyricist had his first international hit with “Alexander’s Ragtime Band.” The song, which created a world-wide dance craze, also brought ragtime, which was considered to be a dangerous and lowly form of music, into all American homes, making the musical genre acceptable. 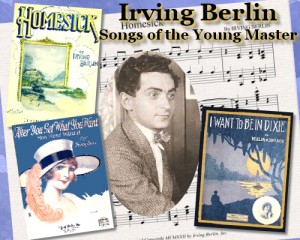 Some of his early successes.

During his career, which spanned 60 years, Berlin would write over 1,500 songs, a total of 19 Broadway shows, and music for 18 Hollywood films. His songs “White Christmas” and “Easter Parade” are holiday classics and one of his greatest gifts to the United States, “God Bless America,” is a cherished tune which has often been sung in times when our nation has had to face its greatest challenges. 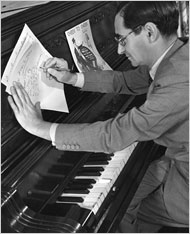 At first glance, Irving Berlin seems to simply have been a natural composer/lyricist. That’s because he had a knack for making it look easy by composing melodies that were tuneful and lyrics that captured the American vernacular. But Berlin worked hard to understand exactly how songs worked and what made a particular tune popular.

He had no education and no skills so as a young man he made money by singing in saloons. After hours, he stayed late and sat at the barroom piano, teaching himself how to play it and trying to understand music composition. He also studied American speech and when he started writing songs he endeavored to keep the lyrics simple and the music memorable. Although unlike Kern, he had no formal training, Berlin possessed an amazing ear for melody and lyric combinations that captured the essence of the American experience. 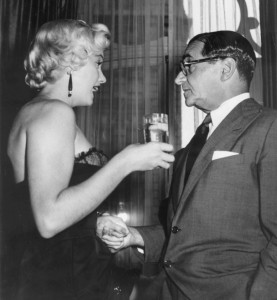 Berlin had numerous hits in the 1930s, which included “Puttin’ on the Ritz,” “Heat Wave,” and “Easter Parade.” The final version of “God Bless America” was written at this time. “White Christmas” belonged to the next decade as it is said to have been composed in 1940. In the 1930s, he composed music for seven films, including Puttin on the Ritz, Follow the Fleet and Top Hat. His greatest musical for the stage would premiere in 1946 with Ethel Merman playing Annie Oakley in Annie Get Your Gun. It’s in that show that Berlin gave the theatre its anthem “There’s No Business Like Show Business.” 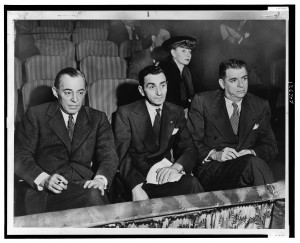 Composer George Gershwin called Berlin “the greatest songwriter that has ever lived.” That is hard to deny. Jerome Kern observed that “Irving Berlin has no place in American music—he is American music.” Berlin embodied the American spirit. He unabashedly loved this nation and he gave it many gifts through the music he composed for Broadway and Hollywood. In Part IV of Broadway History: Great Composers of the 1930s, we look at the remarkable team of George and Ira Gershwin.