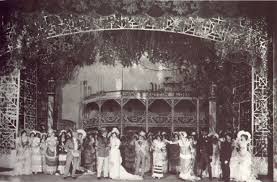 Show Boat started it all and is considered to be the first successful book musical.

The golden age of the American book musical came to an end in the 1960s. It had started with Show Boat in 1927 and ended almost forty years later with the premiere of Fiddler on the Roof. What would follow would be a new type of musical. Although the new musical still usually had a book and the characters were still often grounded in some sort of reality, the stories tended to be less soundly structured, the characters less complex and the integrity of the book less important. There are various reasons for this, including those connected to how America was changing socially and culturally and others related to how the theatre, specifically Broadway, was being transformed.

A Time of Upheaval 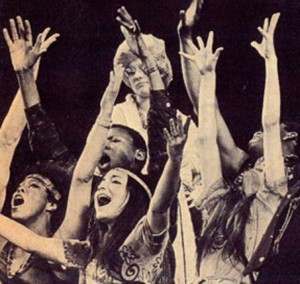 Hair was a different kind of musical.

The ‘60s were a turbulent time in the U.S. The Viet Nam War, protests, sit-ins and other forms of civil disobedience on college campuses, and the Civil Rights and Women’s Rights movements were all a part of a landscape that defined the mid to late ‘60s. In the U.S., as it was in the musical Fiddler on the Roof, traditions were being questioned, challenged and negated.

Art reflects what is happening in society and Broadway and its artists reacted to the era of unrest and distress with musicals like Hair, Pippin, Godspell, Company, and Cabaret. Their themes and structures were different from those that had been utilized by the book musicals. A healthy dose of social commentary regarding current events and situations in America tended to be an important part of most musicals. And audiences reacted favorably to this tendency. At the same time, story became less important. 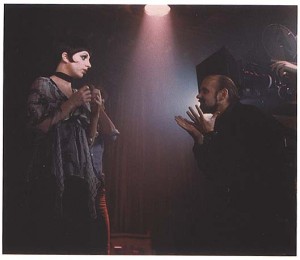 Directors and choreographers, who in the 1950s started their own union, began to get more power in the theatre and became an integral part of the creative process. Partly this was due to innovative, creative individuals like Hal Prince, Bob Fosse, Michael Bennett and Jerome Robbins. By the 1960s, directors and choreographers were as important in shaping the story and characters in a musical as the book writer, composer and lyricist. Ironically it was the total integration of all parts of the musical, including choreography, that was partly responsible for this development.

Looking for Something New 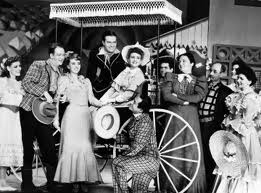 Oklahoma! was no longer vital

Finally, the American book musical as an innovative form had simply run out of steam. Although the development of the book musical was seen as being a linear progression (and still is by some), the fact is the progression was not just linear. (It never is.) History, including theatre history, develops in both a linear and layered manner, which means the book musical was at times taking steps backwards, sideways and every which way before, during and after the course of its golden age and at the same time other forms of musical theatre were being revitalized, developed and reexamined. 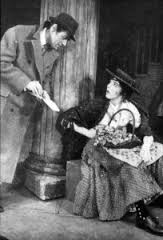 Many believed that the integrated musical, that in which all elements blended together seamlessly to create a work of art and which is in essence grounded in a strong book, was the epitome of perfection as far as musical theatre was concerned. But who is to say that it is perfection? For their time musicals like Oklahoma!, My Fair Lady, West Side Story, and Fiddler on the Roof may have been perfect, the gold standard. But artistic standards change with time and taste.

A New Kind of Musical 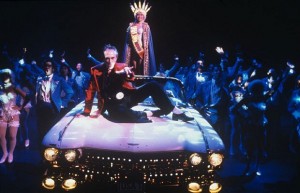 Miss Saigon was one of many big effect musicals that occupied Broadway in the 1980s and 1990s..

By the late 1970s and 1980s and into the 1990s, Broadway audiences were in love with shows like The Phantom of the Opera, Miss Saigon, Evita and Les Miserables. Shows with little to no spoken dialogue, big scenic effects and soaring scores were now in the limelight. It did not mean that book musicals were no longer being written or enjoyed. New musicals in which a strong book was integral and revivals of book musicals were still certainly a part of the Broadway scene. But the type of musical that was perfected by Rodgers and Hammerstein was a relic. Eventually more new trends would develop including a big push by Broadway to go to the movies and use films as the basis for new stage musicals.

Will there ever be another Golden Age for the American musical and if there is one what form will those new, innovative musicals take? Those two questions are impossible to answer but one thing is fairly certain, the new Golden Age will not repeat past accomplishments even one as great as the American book musical.