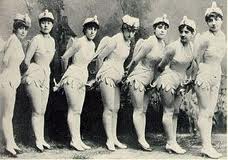 Ten of the 200 legs that made The Black Crook attractive to audiences.

The Broadway long run is a relatively new phenomenon. It’s really a product of changes that occurred in the 19th and into the 20th centuries. There are a few developments that are responsible for the long Broadway run that can go one for more than a decade. In fact, one show, The Phantom of the Opera, has been on Broadway for more than two decades.

First, in the late 19th century as more people were able to get into New York City quickly that meant that there were greater numbers who could fill theatres and see shows. Mass transportation helped to make Broadway accessible. In the mid-19th century, New York was a very dangerous place at night. In the second half of that period, much of the city was illuminated at night, making it much more friendly to visitors. Also, family friendly operettas, such as those by Gilbert and Sullivan, attracted large audiences in the 1880s and a movement to clean up the city and the midtown area of prostitutes helped make going to the theatre more palatable to what was a growing American middleclass. All of these changes made the long Broadway run economically feasible for producers.

The first long run on Broadway occurred in 1866. That was when a blockbuster was produced after the producers realized they had a bad play about to open and needed to do something about it. The name of the play was The Black Crook and it was long and boring tale that focused on a Faust-like plot. It was doomed. But a twist of fate saved the show. It turned out that a French ballet troupe featuring 100 women  was in New York City and prior to their opening night the theatre they were to appear at burned down. They needed a place to perform and the producers of The Black Crook needed something to spice up the show.

Thus, the solution was to include the ballet troupe of women in various dance numbers scantily clad and to add in some major stage effects to supplement the Faust-like storyline. The Black Crook was in essence a bad play that the producers added spectacle and sex to in order to create New York’s first mega hit show. In 1866, it ran for an unheard of 474 performances!

In 1891 Broadway history was made when the musical A Trip to Chinatown ran for 657 performances, making it the first Broadway musical to exceed the 500-performance mark. In 1901, A Chinese Honeymoon, another musical, held the stage for 1,075 performances. It was the first time that a musical went beyond the 1,000-performance milestone on Broadway.

Records Are Meant to Be Broken 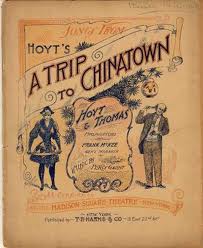 A Trip to Chinatown broke the 500 performance mark.

Six shows are currently on Broadway with runs of 3,000+ performances. They are Jersey Boys, Wicked, Mama Mia!, The Lion King, Chicago, and The Phantom of the Opera. Only one play or musical has ever had a run of over 10,000 performances and that is Phantom. It will really take an amazing show to break that record.