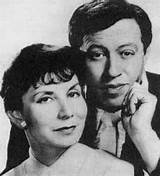 The longest writing partnership on Broadway.

The writing talents of Betty Comden and Adolph Green created some of Broadway and Hollywood’s best-known characters, stories, and lyrics. Their Broadway musicals include On the Town, On the Twentieth Century, and Applause, while their Hollywood credits, which are numerous, include what many consider to be the best movie musical ever produced, Singin’ in the Rain. The team started working together in the 1940s and continued to do so into the 1990s. Their scripts and lyrics were clever, filled with laughs, and peopled with characters with whom audiences connected. 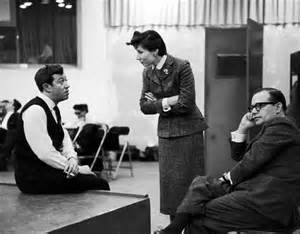 Conferring as they work on the musical On the Town.

Betty Comden (Basya Cohen) was born in Brooklyn in 1917, New York, and Adolph Green was born in the Bronx in 1915. Their roots would certainly influence their ability to write about the people of New York, to create sophisticated gags, and to develop works that connected with a wide range of audiences. They were both actors and writers who met in 1938 while making the rounds to agent offices in New York City.

Their first show was called The Revuers. It was a group-written project that was comprised of satirical skits, songs, and dances. The show premiered at the Vanguard in the Village and went on to be performed at various theatres and nightclubs uptown. The show and the troupe, which included Comden, Green and Judy Tuvim, Alvin Hammer, and John Frank, got more recognition on radio. They took their act to Hollywood, but it was not well received. Judy Tuvim stayed in Tinsel Town, changed her name to Judy Holliday, and became a major comedic star. Comeden and Green went back to New York and not too long after got their big break. 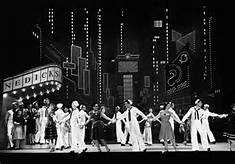 On the Town on Broadway.

In 1944, the writing team became part of a collaborative process that included composer Leonard Bernstein and choreographer Jerome Robbins. The writing project was On the Town, and the story, which was based on Robbins’ ballet piece Fancy Free, focused on a situation of which men and women of the time were well aware- the need for passion, pleasure, and compassion at a time when the world was at war. Robbins had used Bernstein’s music for his original ballet. The two decided that they wanted to base a Broadway show on it.

On the Town was directed by George Abbott and opened on Broadway on December 28, 1944, running for 462 performances and closing February 2, 1946. Along with writing the book and lyrics, the duo was also in the musical, with Comden playing the role of Claire and Green playing Ozzie.

The musical comedy looked at the lives of three U.S. sailors who are given a short shore leave in New York City during World War II. Featuring fantastic dance numbers, an exciting score, and a book and lyrics that celebrated the concept of carpe diem, On the Town treated subjects such as intimacy and sex with an honesty and wit that Broadway had never before seen. It helped to set the writing duos career on the fast track.

Singin’ in the Rain 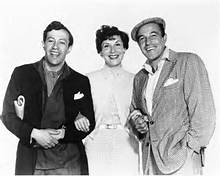 Comden and Green had numerous successes, but perhaps their best-known and most beloved musical is Singin’ in the Rain. The film, which starred Gene Kelly, Donald O’Connor, Jean Hagen, and a then unknown named Debbie Reynolds, was directed by Kelly and Stanley Donen and produced by Arthur Freed.

Comden and Green had been two of the writers who were part of the Freed Unit at MGM in the mid-40s and had worked with the producer on numerous projects, including the film version of On the Town. In 1950, when they were back in New York, Freed called on them to do a new project.

Freed, a lyricist, and his writing partner, composer Nacio Herb Brown, had a catalogue of songs from which the producer wanted a musical written. It was up to Comden and Green to create the characters, story, and dialogue. They struggled mightily and thought, as they came up with nothing, that they would be fired.

In an interview with William Baer for Michigan Quarterly Review, the writing team remembered that time.

Comden: Yes, we walked into Arthur’s office, and he said, “Well, your next movie is…”

Comden: That’s right, kids,”—he always called us kids”—Well, kids, your next movie is going to be called Singin’ in the Rain, and it is going to have all my songs in it. ” And that was that. That was the whole assignment. And it may not sound very difficult, but it was terribly hard to do, almost impossible. 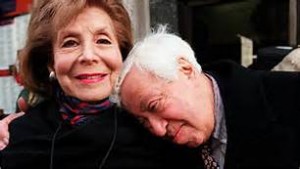 The team shared many challenges, triumphs, and memories.

Baer: Is that because you have to make all these unrelated songs somehow fit into the story you’re creating?

Comden: That’s right, you have to create a whole new story with characters and situations that fit the already existing songs. It’s like working backwards.

Baer: And, of course, you’re obligated to include the most popular songs.

Comden: Yes, but the very first thing you have to do is come up with an overall idea for the movie that’ll be appropriate to the general feeling of the songs. And that was very hard to do, but we finally figured it out.

Green: Finally! It took us quite a long time before we realized that the songs would fit best in the time period for which they’d been written. Most of them, at least.

They wrote the lyrics for Peter Pan.

Comden: Which was the changeover period in Hollywood from the silents to the talkies, when Arthur Freed and his partner, Nacio Herb Brown, wrote many of their songs for the early film musicals.

Green: Broadway Melody,” for example—which was a very big hit when it came out in February of 1929.

Comden: And Singin’ in the Rain.”

Green: Singin’ in the Rain” was first used in The Hollywood Revue of 1929 directed by Charles Riesner.

Baer: How many Freed-Brown songs were there?

Comden: About a hundred or so. He gave us a huge stack of songs and said, Go write a movie.”

Green: But a movie about what? That was the problem. All we knew was, that at some point in the film, someone would be out in the rain and singing about it.

When they discovered the right subject matter, the changeover in Hollywood from silent movies to talkies, they had their film. It continues to be a favorite of movie critics and musical lovers. 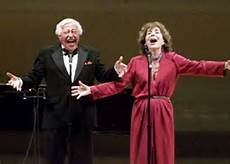 The 2014-2015 Broadway theatre season will see two Comden and Green shows produced. The revival of On the Town, which is a huge hit, is currently playing. Their musical On the Twentieth Century, opening March 12, 2015, will have its first major Broadway revival since it premiered in 1978. When it was first seen on Broadway it won five Tonys. It will star Peter Gallagher and Kristen Chenoweth. Plus, their musical version of Peter pan, for which they wrote the lyrics, was recently produced live on NBC-TV. 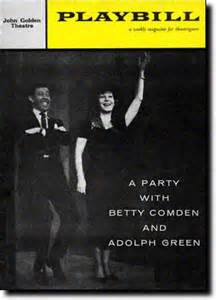 Comden and Green on Broadway.

Betty Comden and Adolph Green hold the record as Broadway’s longest running collaborative team. Between them they won 17 Tonys, were nominated over 30 times, and as a team received Kennedy Center Honors in 1991. On October 23, 2002, Adolph Green passed away and on November 23, 2006, Betty Comden died.

They left behind a wealth of lyrics, stories, and characters that continue to entertain audiences today. And although many people thought they were married, they were not a romantic couple in any way. But they were one heck of a team.