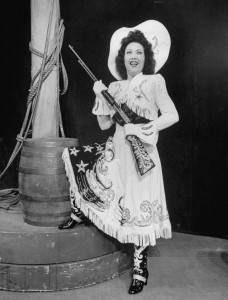 Ethel Merman in the role that would give her the anthem with which she’d be identified, “There’s No Business Like Show Business.”

Ethel Merman was one of the biggest stars to ever tread the Broadway boards. On Broadway, Merman created the roles of Reno Sweeney (Anything Goes), Annie Oakley (Annie Get Your Gun) and Mama Rose (Gypsy). Merman, who was known for her big, bigger, biggest voice, was not only an astounding performer but, as she proved in Gypsy, a brilliant actress. If there’s one person who defined Broadway musical theatre talent in its Golden Age, it was Ethel Merman.

She was born Ethel Agnes Zimmerman in Astoria, Queens, NYC in 1908. (Years later she claimed her birth year was 1912. It was not). She attended and graduated from William Cullen Bryant High School and through her teens she and her family would take the subway every Friday night to see the latest vaudeville show at the prestigious Palace Theatre. Merman witnessed some of the greatest talents there, including Fanny Brice, Sophie Tucker and Lillian Russell. 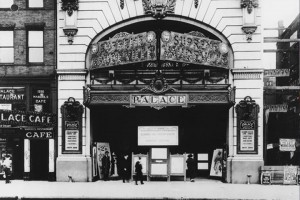 The Palace Theatre was the most prestigious vaudeville house in the nation.

Although she worked at imitating the fabulous female singers she admired, Merman possessed a unique voice that was dynamic, powerful and loud. There was no doubt that she could sell a song. In 1924, after graduating from high school, Merman worked as a secretary. It was around that time that she changed her last name from Zimmerman to Merman, feeling that it was better for the stage and the marquee. Within six short years, she’d be performing at the Palace, that same Palace she had gone to with her family, for $500 a week and also in Broadway shows and in the movies. Reviewers immediately noted and liked her unique singing style.

When Merman was cast in the Broadway production of Anything Goes, she was already a hit on the stage and was known on the screen. But this Cole Porter musical, which was the first of five that she would do by the composer/lyricist, would make her a star. Her booming voice, comic timing and ability to be brash and yet charming won everyone over as she truly was “the top” as Reno Sweeney. The musical opened on November 21, 1934 at the Alvin Theatre. Interestingly, this first of three roles by which she would be known was the only one that she got to also play on screen.

Ethel Merman and Bing Crosby sing Cole Porter’s “You’re the Top” in the 1936 Paramount film version of Anything Goes.

The 1936 film of Anything Goes starred Bing Crosby. Dixie Lee, his wife, was supposed to play Reno, but she dropped out of the movie and Merman dropped in. But there were huge differences between Anything Goes the stage musical and Anything Goes the musical film. First, it was seen as being a vehicle for Crosby and the Reno Sweeney role was diminished and became secondary. Also, the motion picture industry had a morals code that demanded some of the major elements that made the show so popular on Broadway, the witty, sexual innuendo and blatant sexuality, be struck from the script. The movie was dull, lifeless and stale, and instead of being “the top,” it was a flop.

Annie Get Your Gun

It was the sister and brother team of Dorothy and Herbert Fields who with Jerome Kern were writing a musical based on Annie Oakley. However when Kern fell ill and had to drop out, Irving Berlin agreed to create the score. Dorothy Fields approached Merman to play Annie Oakley, and she agreed.

Ethel Merman at the age of 74 closes the 1982 Royal Variety Performance with her anthem “There’s No Business Like Show Business.” The show was presented at the Theatre Royal, Drury Lane, London in the presence of Her Majesty Queen Elizabeth, The Queen Mother. The theme of the show that year was “The Magical World of Musicals.”

On May 16, 1946, Annie Get Your Gun opened at the Imperial Theatre and ran for 1,147 performances. Merman was an instant hit as the woman who could do “anything better than” the man she loved, Frank Butler. It gave Merman her anthem, the brilliant song “There’s No Business Like Show Business” and solidified the performer’s reputation as a Broadway icon. During the run, Merman took just two vacations and missed only two performances due to illness. The film role went first to Judy Garland, but she was eventually replaced by Betty Hutton. 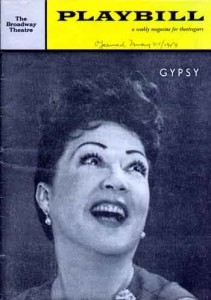 The role of Mama in Gypsy was the third and final great performance that’s associated with Merman. The musical, which featured music by Jule Styne, lyrics by Stephen Sondheim and book by Arthur Laurents, gave Merman the role of a lifetime, Rose Hovick, the mother of the celebrated burlesque star Gypsy Rose Lee. It opened at the Broadway Theatre on May 21, 1959 and had a run of 702 performances.

Merman was extraordinary as the mother who would not let her kids quite show business. The role gave the aging star a wonderful range of emotions to play, from domineering stage mom, to uncompromising vaudeville dreamer, to show business weary matriarch, and finally to reconciliatory mother. And although celebrated film director/producer Mervyn LeRoy, who was to direct the 1962 film, saw Merman in the show many times and assured her she would repeat the role on film, it was Rosalind Russell who got to play Mama in the popular movie.

Ethel Merman raised the level of performance on Broadway by creating characters that were vivid, powerful and determined to achieve their goals. Her voice was as unique as could be and her ability to reach everyone in a vast Broadway house prior to the microphone age meant that she could connect with an audience unlike any other performer.

Many years ago in 1979, when Merman was still alive (she passed on February `15, 1984), I was talking to a friend who had appeared in numerous Broadway shows and on various popular records. She was a perennial member of one Broadway singing chorus or another. (Back in those days they had a singing chorus and a dancing chorus.) She was fortunate enough to be in Annie Get Your Gun with Ethel Merman. I asked her what Merman was like. 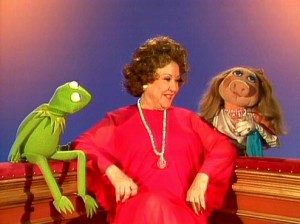 With Kermit and Miss Piggy.

She acknowledged that the performer was a very powerful presence on stage but then she told me a story. She said one day when they took a break Merman went over to the producers, who were Richard Rodgers and Oscar Hammerstein II, and after that conversation one of the chorus girls was taken out of the room. The next time she was seen, the girl was crying and getting her belongings. She had been fired. I asked my friend why that had happened.

“Merman felt the girl was too good,” noted my friend. “ She was very insecure as a performer and didn’t want anyone who might take the limelight away from her. “

Proving that Ethel Merman, though she appeared to be superhuman on stage, was like everyone else, unsure of herself. Insecurities aside, she will be remembered always as a uniquely talented Broadway performer.