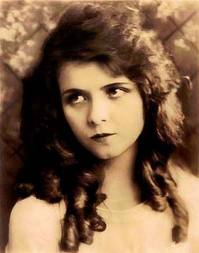 Olive Thomas was a beauty.

Olive Thomas was a Broadway chorus girl, a strikingly beautiful Broadway is filled model, and a film actress. She is also said to be the ghost of the New Amsterdam Theatre, which is presently operated and owned by Disney, and which was the venue for the celebrated Ziegfeld Follies.

The ghosts of those who have worked in various jobs on The Great White Way are said to still walk its streets and show places. Producers, actors, musicians, stagehands, and others who have been a part of New York’s theatre are said to drift in and around the theatre district and its haunts.

The Early Career of Olive Thomas

Thomas in the Follies.

Olive Thomas, who was born Olive R. Duffy, went to New York City at the age of 19. At that time, she was separated from her first husband, Bernard Krugh Thomas, who she married when she was 15. Later, she would be granted a divorce from him.

Her big break came when she was 20 and entered and won The Most Beautiful Girl in New York City” contest, which established her as a popular artist model, and, eventually, helped her win a chorus girl role with the Ziegfeld Follies. Commercial artist Howard Chandler Christy sponsored the contest. She posed for some of the most important artists of the time, including Harrison Fisher, Raphael Kirchner, and Haskell Coffin and appeared on numerous magazine covers, including the Saturday Evening Post. 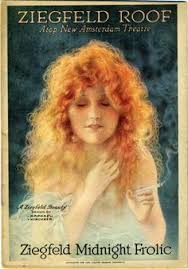 Thomas caught the eye of Florenz Ziegfeld in numerous ways. On June 21, 1915, she made her debut in his famous Follies. Her stunning beauty made her exceptionally popular, and Ziegfeld decided to put her in his roof garden revue, Midnight Frolic. This production, whose audience a large number of very rich men, was much more risqué than the Follies. The women who starred in these shows often received very expensive gifts. Thomas was lavished with tokens, including a $10,000 string of pearls from German Ambassador Albrecht von Bernstorff.

Ziegfeld, who was married to actress Billie Burke and well known for his affairs, became intimately involved with Thomas, who would develop a reputation for being a party girl. Thomas, who wanted Ziegfeld to marry her, end the affair. 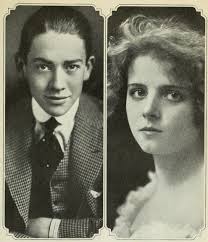 Pickford and Thomas has a stormy marriage.

Thomas continued in the Follies and was the first “Vargas Girl,” being painted nude from the waist up, holding a rose. Ziegfeld kept the portrait in his office, which was entitled “Memories of Olove,” but he could not keep Thomas in his show. In 1926, she ventured to Hollywood, where he life changed drastically in two ways: she signed a movie contract and quickly married Jack Pickford, the younger brother of Mary Pickford, who, at the time, was the biggest female star in motion pictures.

The Pickford family decried the hasty marriage. Olive, who signed with International Film Company in 1916, was in her first film quickly, appearing in “Episode 10” of Beatrice Fairfax, and in 1917 she appeared in her first feature, A Girl Like That for Paramount Pictures. 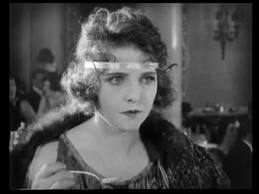 The first flapper in film.

1917 was a big year for Thomas, as she signed with Triangle Pictures and announced her engagement to Jack Pickford, who she had actually secretly married the year prior while in New Jersey. She made numerous films at Triangle and became so popular that in 1918, she signed a contract for $2,500 per week Selznick Pictures Company. Her first three films, all of which were successful, were Upstairs and Down, Love’s Prisoner, and Out Yonder, all of which were released in 1919.

In 1919, she made a big hit in The Flapper, where she was the first actress to ever play such a character. In fact, it was the movie’s scenarist, Frances Marion, who coined the term, making “flapper” a part of America’s vernacular. Her final film, Everybody’s Sweetheart, was released after her death. 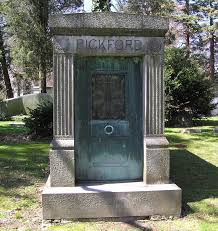 There have been numerous rumors regarding her death. The most common one was that she committed suicide after finding that she has contacted syphilis from her husband. It is true that she has syphilis and that Pickford would eventually die from complications of the disease. The other rumor that started to generate was that her husband murdered her. But neither seems to be the case.

Thomas and Pickford, whose marriage was in shambles, decided to try to renew their relationship and ventured to Paris for a second honeymoon. On September 5, 1920, the couple went out for a night on the town, visiting the celebrated bistros in the Montparnasse Quarter of Paris. They returned to the Hotel Ritz, where they were staying, at around 3 am.

Pickford was sleeping and was awakened by Thomas, as she cried, “Oh, my God!” He went to her side to find a blue bottle of mercury bichloride liquid solution, which was used to treat topical sores caused by Pickford’s chronic syphilis. The liquid, when ingested as poisonous.

Despite his efforts, which included trying to get her to vomit, and those of a physician, who arrived and pumped her stomach three times, Thomas died five days later. After an investigation and autopsy, it was determined that Thomas’ death was accidental. It’s believed that Thomas may have been confused by the blue bottle, which was labeled in French, and she may have thought that she was drinking alcohol. 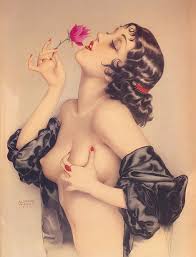 Her Vargas portrait is famous.

Not long after her death, Thomas was spotted by New Amsterdam stagehands, wearing one of her Follies costumes, a green, beaded dress and carrying a blue bottle. She was seen in the theatre and on the roof, where the roof garden theatre had been situated.

For years, the New Amsterdam was in decay and condemned, then Disney Theatricals signed a 99-year lease on the theatre and in the late 1990s began renovating the venue. It was at that time, that the ghost of Olive Thomas was, again sighted. A night security guard saw a woman on the stage in a green Follies dress with a blue bottle. When he yelled at her, she walked out onto 41st Street. The security guard became hysterical and called Disney Theatrical VP Dana Amendola at 2:30 in the morning! 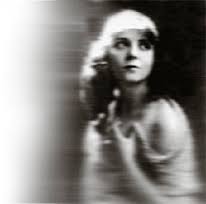 You may see her.

Sightings continue to occur. Sometimes, she will talk to men. She tends to be fairly passive, however, when there’s renewed activity, such as a new show being put in, or when those who are of her generation, occupy the theatre.

With Aladdin soon to be loading into and holding its technical rehearsals at the New Amsterdam Theatre, expect to hear more sighting of and activities from Olive Thomas, who was considered to be the most beautiful burnet of her generation. If she does make her presence known, she may add an extra lift to the show’s magic carpet ride.