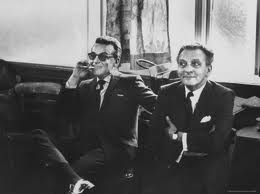 With My Fair Lady we take a step backwards from West Side Story. Not in terms of artistic accomplishment, but in terms of time. West Side Story was part of the 1956-57 Broadway theatre season while My Fair Lady was the major hit of the 1955-56 season. It opened on March 15, 1956 and would run for 2,717 performances. It was nominated for 10 Tonys and won six, including Best Musical and Best Direction (Moss Hart).

With My Fair Lady, the creative team of Alan Jay Lerner (Lyrics and Book) and Frederick Loewe (Music) managed to write what is considered by many to be the most perfect book musical to ever grace the Broadway stage. 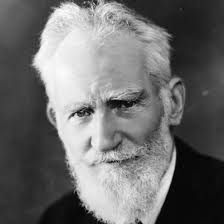 The source material for My Fair Lady was George Bernard Shaw’s Pygmalion. Shaw, a world-class playwright who created intellectual comedies, first saw the play produced in 1912. The play takes the ancient Greek myth of Pygmalion, which is the story of a sculptor named Pygmalion who falls in love with one of his creations. 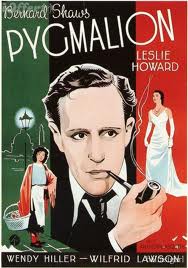 The 1938, which starred Leslie Howard as Higgins, was written by Shaw.

Shaw’s play focuses on an egotistical phonetics professor, Henry Higgins, who bets his associate, Colonel Pickering, that he can transform a cockney flower girl, Eliza Doolittle, so dramatically that the upper classes will believe that she is one of them.

Lerner, whose previous work with Lowe included Brigadoon (1947) and Paint Your Wagon (1951), was a skilled craftsman and storyteller. In the book, Lerner followed Shaw’s play very closely, retaining its wit, well-written characters and plot. The book is winning for sure and Lerner’s lyrics work wonderfully in revealing character, creating a cohesive plot and actively developing character relationships. 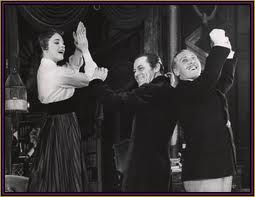 “The Rain in Spain”

Reviewer William Hawkins in the New York World Telegram and the Sun observed, “There is too much to remember about My Fair Lady to begin to tell about it all. Alan Jay Lerner’s enchanting use of Shaw, both in book and lyrics. The exquisitely funny number that grows from the line about ‘The Rain in Spain’”

The lyrics and tune for “The Rain in Spain” serve as a fine example of Lerner and Lowe’s artistry. The number reveals Eliza Doolittle’s progress in working with Higgins, creates a common bond between the two and deftly develops a scene filled with germane situation and character comedy.

Loewe Scores with His Score

Loewe’s score for My Fair Lady included numerous songs that would become hugely popular, including “I Could Have Danced All Night,” “I’ve Grown Accustomed to Her Face,” and “On 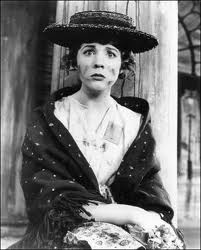 Julie Andrews and “Wouldn’t It Be Loverly?”

the Street Where You Live.” “Wouldn’t It Be Loverly?” became Julie Andrew’s theme song and the rollicking “Get Me to the Church on Time,” sung by Eliz’a ne’er-do-well father, had a tune, lyric and rhythm that would not quit.

With a musical that was so well crafted and in which Lerner handled the primary plot between Eliza and Higgins and the subplots that involved the marriage of Eliza’s father and the courtship of Eliza by Freddy, with aplomb, the American book musical reached a new level of artistry. 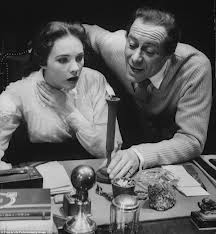 Andrews and Harrison were both stellar.

Finally, the cast was superior. It included Rex Harrison as Higgins, Julie Andrews as Eliza, Robert Coote as Pickering and Stanley Holloway as Eliza’s father, Alfred P. Doolittle. All four were nominated for the Tony and Harrison won. Moss Hart’s direction was seamless.

Changes in the Offing

The late 1940s through the 1950s was the time when some of the greatest book musicals were written. Oklahoma!, My Fair Lady and West Side Story were all landmark shows. But as American culture ventured into the ‘60s, the book musical would start to lose energy. There was a new type of music on the horizon, America was about to enter a phase where cultural constructs would be weakened and fractured and unrest and uncertainty would define the decade.

The book musicals that would be created, such as Camelot, The Sound of Music and A Funny Thing Happened on the Way to the Forum, were good but not innovative or groundbreaking. Ironically what is considered to be the last great book musical, Fiddler on the Roof (1964), with music by Jerry Bock, lyrics by Sheldon Harnick and book by Joseph Stein, would focus on “tradition,” and in the 1960s, it was tradition (of all types) that was being questioned, destroyed and recreated by America’s youth.