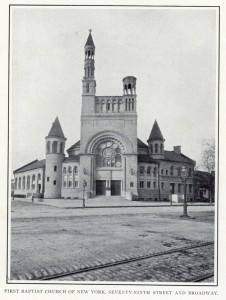 George Keister was an architect in the early part of the 20th century who eventually became a specialist in designing theatres. One of his first theatrical commissions was the Stuyvesant (Belasco), which he designed for producer David Belasco in 1907. He would go on to design a dozen more NY theatres, including the historic Apollo Theatre (1914), which was then called Hurtig & Seamon’s New Theater. Although many of the theatres he designed are no longer extant, those that are, including the American Airlines Theatre (Selwyn Theatre 1918), Keister was an important force in the expansion of Broadway.

Keister was working as an architect in New York in the 1880s. In the late 1880s, he received the commission to design the First Baptist Church, which is located at Broadway and 79th Street. The church was founded in 1745 and over the years occupied many different building in various locations. Prior to moving to its present location, the church was at 39th Street and Park Avenue. An influx of members, partly fueled by various morality movements, including temperance, created the need for a new church. 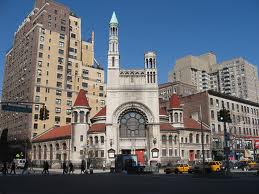 The design was eye-catching. The exterior was crowned by two dissimilar towers, which rose above the primary entrance. The tallest tower symbolized Christ and his greatness and the shorter of the two, which has an unfinished look, represented the important work the church had left to do prior to Christ’s return. The roof was composed of plum-colored Spanish tile and the façade was elegant limestone. 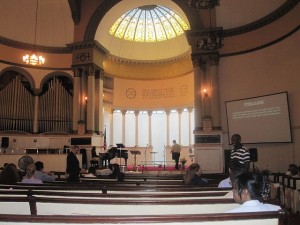 The interior, which could hold 700 worshippers, featured woodwork painted cream and trimmed with dark mahogany. Yellows and browns were a major part of the interior color scheme and about half of the ceiling was composed of stained glass, which bathe the interior in softly filtered light.

Keister had angled he church oddly on the corner, enhancing its visibility and creating a dominant presence. It still stands today and is a striking presence. 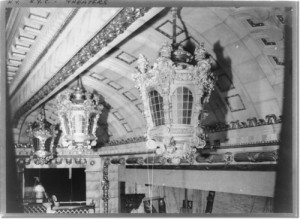 Interior of thE Astor above the proscenium.

Just after the turn of the century, Keister designed three theatres. In 1905 he created his first two, the Colonial (Hampton’s at 1887 Broadway) and Loew’s Yorkville Theater (157 East 86th Street). The following year the Astor Theater opened. None of these theatres have survived. In 1907, he would design a theatre for one of the most renowned forces on Broadway, David Belasco.

The Stuyvesant, which Belasco renamed after himself in 1910, was striking in that it evokes neo-medieval and neo-Renaissance styles and it at 13 stories it was one of the tallest buildings in the 44th Street area. It included Tiffany lighting and ceiling panels, massive murals that were created by Everett Shinn and exquisite woodwork. The showplace housed a ten-room duplex penthouse.

Belasco lived in the quarters and used part of it as his office. It was designed with a window that allowed him to see what was happening on the stage. the stage from a window in his office and was known to keep a watchful eye on it. The producer called the theatre home and rarely left its comfortable confines.

The Belasco, which seats 1016, is owned by the Shubert organization and is the oldest existing theatre designed by Keister. Recent productions include the Tony nominated End of the Rainbow and Clifford Odet’s Golden Boy.

Keister’s design of the Apollo Theatre came into being in 1914. At first it operated as a vaudeville and burlesque theatre. By 1933, with the neighborhood in transition and all types of theatre attempting to survive the Great Depression, the Apollo was converted as a showcase for black performers. During that time it underwent extensive renovations. By the 1970s, it was in decline. At that time it was converted into a movie house. In the early ‘80s it was purchased by Inner City Broadcasting and received federal, state, and city landmark status. It reopened in 1985 as a live entertainment venue and is one of New York’s most popular theatre landmarks. 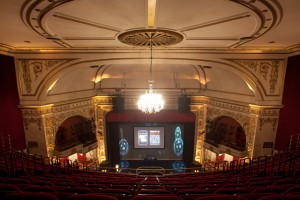 Keister created a slew of theatres during the 1920’s boom. His designs were elegant and stimulating as they harmoniously combined various styles and motifs. The man who designed one of the most interesting churches in New York became a specialist at creating theatres.

It was ironic that he was criticized by association when in 1910 the pastor of the First Baptist Church, Dr. Isaac M. Haldeman, placed an advertisement in The New York Times denouncing the theatre as “an invention of Satan.” Haldeman, who noted later that he had never been to play, was also denouncing Keister, who it appears had served both god and the devil with his designs.