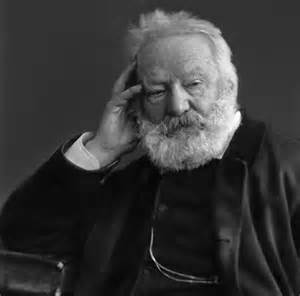 Victor Hugo was a French writer who was best known for creating plays and novels. He was instrumental in the early 19th century for changing French theatre forever, and, also, for transforming much of the theatre around the world. Hugo was a revolutionary who possessed radical ideas about art, and became a leader of a movement that challenged rules about art that the French Academy had established and enshrined in the 17th century. It was Hugo who would destroy those rules and almost 200 years later it was that same man who would give Broadway one of its biggest hits.

Unless you have a Ph.D. in theatre, you’ve probably never heard of Hernani, let alone read it. But Hernani was a groundbreaking play that premiered on the Paris stage on February 25, 1830. It literally created a riot in the theatre as Romantics and Classicists clashed over Hugo’s techniques and the manner in which he treated his subject matter. 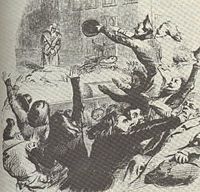 A riot broke out during Hernani.

Hugo upset Neo-Classical traditions, which were deeply ingrained in France, by writing a play in which the hero does not live by the rules of society, which moved from one location to another, and which broke the rhyming couplet. Although the reaction in the audience, which included numerous brawls, may sound ridiculous today, what Hugo did was seen as being quite dangerous, as the “rules” of French Neo-Classicism were related to artistic and social order.

The Romantic movement, which was manifest in all art including plays, novels, sculpture, painting, and music, lasted about 50 or 60 years. The plays and novels featured an unlikely hero of the time, usually someone of noble birth who was true to their word but could not live by society’s rules. This hero also had a love interest that was forbidden in some manner, and their love was seen as only coming to fruition on another plane, such as after death.

The plays featured local color, that is settings that defined a specific location, and the Romantic dramas did not observe the three unities, which were developed by the Neo-Classicists. The unities, time, place, and action, dictated that a play could not deal with an action that in real life would take more than one-day, characters could not travel to locations that would take more than a day, and one action and scene has to follow the next. 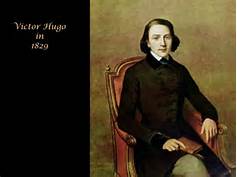 The Romantics anticipated the Modern Era, which would include many artistic movements over a very short period of time, including Realism, Naturalism, Expressionism, Symbolism, Dadaism, and Surrealism. Romantic artists like Hugo not only said that it was good to think out of the box, they proved that it was worthwhile in many ways, as they reinvigorated what had been a stagnant French theatre.

Victor Hugo’s plays are not performed today, however, his most popular Romantic novel became a major Broadway and film hit when it was turned into a musical. The novel, which took Hugo 17 years to write, Les Miserables, was lambasted by the critics, but loved by the public, served as the source material for the musical of that same name. It is one of the most popular musicals of the late-20th and early-21st century, and its Romantic elements, along with the music, situations, humor, and dramatic scenes, move people to experience a wide range of emotions. It is the kind of theatre that Hugo wanted to create.