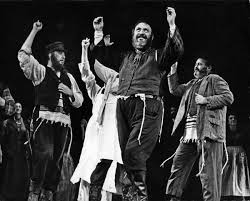 Fiddler on the Roof is considered to be the last great book musical.

The Golden Age of the American book musical on Broadway spans about 40 years. It began with the 1927 premiere of Show Boat by Kern and Hammerstein and came to an end in 1964 with Fiddler on the Roof by Bock, Harnick and Stein. In this four-part series, we’re going to consider what defines the genre, what circumstances led to the development of the book musical, and what some of the important musicals from the period are. In Part 1, we define the genre- American book musical.

Musicals Prior to Show Boat 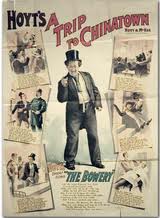 A Trip to Chinatown, which is still in the top 25 of long run Broadway shows, was a musical comedy with a thin book.

Show Boat is considered to be the first true book musical. Prior to Show Boat other popular musical theatre genres in the U.S. were English operetta, musical comedy, the musical revue, the minstrel show, the extravaganza and burlesque. Some of these types of musical theatre were similar to the book musical and although many came from other counties, each was made “American” in some way or another.

Music Prior to the Book Musical

These musicals tended to focus on music and singing first, and then lyrics and story last. Characters were either one or two dimensional and the plot in each, if there was one, was thin. Depending on the genre, the music in these pieces usually had some sort of an American sound. Still, the style of music varied a lot with operetta bearing the heaviest European influence and the minstrel show and musical comedy offering that American Tin Pan Alley sound, which was often connected to jazz, blues, ragtime or folk music. Book musicals might certainly be influenced by European traditions but they had a sound that was to some degree connected to American musical styles, modes and genres. 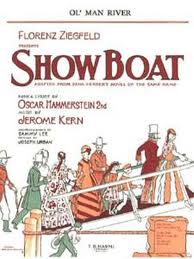 Show Boat was a reaction against musicals like A Trip to Chinatown.

What elements comprise the American book musical? There are five basic aspects that delineate the genre.

These are the five major elements that define what we call the American book musical. When utilized creatively, artistically and in a balanced fashion, they work together to offer an evening of entertainment that is a unified, artistic entity.

These elements were not born out of thin air and the American book musical did not spontaneously appear on Broadway stages. There were numerous forces at work that led to the creation of the book musical in America. In Part 2, The American Book Musical Forces at Work, we look at what influences, innovations and individuals were responsible for the birth of this unique genre.